Men can get breast cancer too! Would your guy know what to watch for? 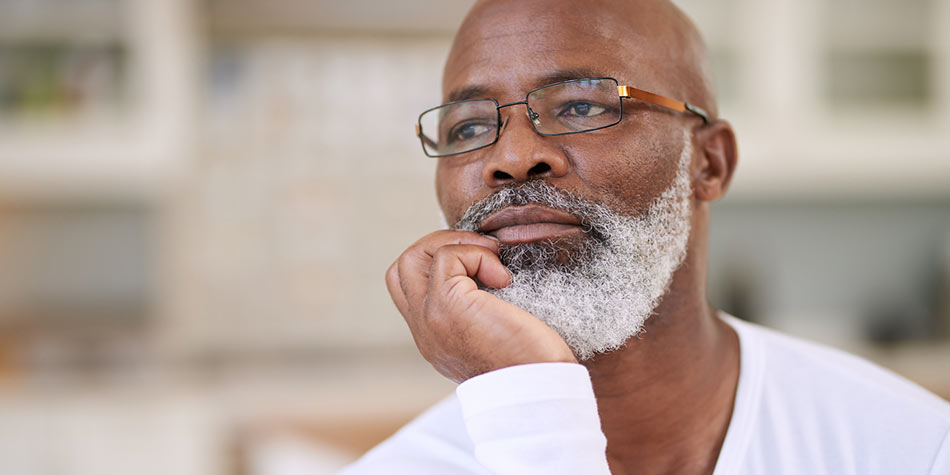 While breast cancer in men is rare (less than one percent of all breast cancer cases) it's often diagnosed at a more advanced stage. That's because many people aren't aware of the risk and men don't recognize their symptoms as breast cancer. Would your guy know what to watch for?

Only one in a thousand men will ever be diagnosed with breast cancer. Often the first sign, a small, painless lump under the nipple or in surrounding tissue, goes unnoticed - or is ignored. Other signs of an issue can include nipple discharge or a change in the skin covering the breast or the nipple itself. These are the same symptoms of breast cancer in women.

Everyone is born with a small amount of breast tissue. During puberty women develop more breast tissue, which contains milk-producing lobules, ducts that carry milk to the nipples, and fat, while men do not. Still, it's that small amount of tissue that puts some men at risk.

The biggest risk factor for developing breast cancer doesn't distinguish between men or women; It's an inherited abnormal gene. These mutations also carry an increased risk for men developing prostate cancer. Many people don't know if they carry a BRCA or other abnormal gene but they are aware of a strong family history of cancer. It's wise for men to mention this history to their doctor, who may refer them to a genetic counselor to consider genetic testing.

Other factors that increase the risk of male breast cancer include:

Just like women, early detection and prompt treatment is critical to breast cancer. Detection is the primary issue for men, who may not notice breast lumps until the lump is visible or has grown too large to ignore. Some men may feel embarrassed about being seen for a lump or worry that a breast issue makes them seem less masculine, further delaying diagnosis. Women are far more likely to perform breast exams themselves or have a provider perform an exam.

So, what can men do to prevent developing breast cancer? Know their risk, maintain an ideal body weight, limit alcohol consumption and get an annual checkup and routine testing.

For men who are at risk, doctors recommend careful breast exams and routine mammography. For men who notice a lump or have other symptoms or breast changes, a diagnostic mammogram is also the first step, followed by an ultrasound and breast biopsy.

It important to note that male breast development, gynecomastia, is the most common diagnosis regarding the male breast and the most common reason for male diagnostic mammography. "Some men might feel embarrassed to have a breast-related issue or concern but they should get it properly evaluated, explains Radiologist Dr. Jeffrey Weigle. "You can't assume that a male breast-related issue is benign. A diagnostic mammogram is the first step towards having either reassurance and peace of mind, or a diagnosis so that lifesaving treatment can begin."

October 20, 2022 by Ellen Miller
For 30+ years, Sue Abkowitz, MD, and Glen Crawford, MD, have volunteered all over the world, and they've taken their kids along too.
Previous Post
Portsmouth Regional Hospital

Mammograms: what to expect

October 12, 2022
What you can expect from and how to prep for your mammogram, a recommended screening schedule, and answers to commonly asked questions.
Next Post
Back to blog home

What You Should Know About Testicular Cancer

Diabetes and breast cancer: Q&A with a breast surgeon

How to familiarize yourself through breast self-exam